Ten Years Ago.... the story of Meigs Field

Ten years ago, Chicago and the Aviation world woke up to see Meigs Field destroyed. Mayor Richard Daley took it upon himself to circumvent the law, the rules, and the rights of the citizens and pilots of the world to destroy a landmark. Many will remember waking up the next morning and watching the news in complete shock.


Meigs Field had a deep history in the Chicago area. While it wasn’t the everyday home to aircraft, it was just for transient traffic visiting the downtown Chicago area. It was used frequently and was a treasure to many people who lived, visited or worked in the area.


Merrill Church Meigs was born in 1883, a newsman in Chicago at the Chicago Herald and Examiner. He was inspired to become a pilot after covering the solo flight across the Atlantic Ocean by Charles Lindbergh in 1927.

Later in life he became head of the Chicago Aero Commission and was instrumental in the development of Meigs field, which was named in honor of him and his hard work in developing the field in 1948.

This troubled field was under attack most of its life. The future of the lakefront airport had been in dispute since the 1990s. Daley had hopes of turning it into a 91-acre park – but it looked like these plans would be blocked for years by the courts and legislative fights with those who considered it a valuable business amenity. So he ordered a stealthy and nearly irrevocable strike that began the transformation of Meigs Field back into Northerly Island and a park.

The public and their laws can be so annoying! Hearings, court battles, compromise proposals, impact studies, etc., that whole messy governmental process thing that's really just a formality - in Chicago anyway – why do it properly when you have a few friends with bulldozers.


The Friends of Meigs Field, an organization dedicated to preserving the field, received a call in the middle of the night asking if they knew of any construction being down at the field. They were stunned of course and headed out there to see what they could find out. They weren't allowed on the field and were later told that the night was chosen specifically because only light aircraft were on the field that night.

And then came the lawsuits. Chicago faced a $33,000 penalty and up to $4.5 million in additional fines for the clandestine destruction of Meigs field. The fine was for shutting down a public use airport without giving the required 30 day notice.

The additional fines were from the FAA basically saying city officials improperly diverted $1.5 million in federal grants and airline passenger taxes intended for capital repairs to pay for demolishing the Meigs runway. The FAA could have ordered the city to repay any improperly used funds or impose penalties of up to $4.5 million if the city refuses to comply.

Regarding the alleged misuse of airport funding, a city official was quoted as saying, "Some funds were used to build the airport, and it was appropriate to use the airport funds to remove the airport."

When it was all said and done, the only repercussion from this, besides a public black eye, was the $33,000 fine. That’s it.


Now, Northerly Island, the old site of Meigs Field, is a 91- acre park on Lake Michigan. The majority of this space is dedicated to “strolling paths, casual play areas and a spectacular view of the Chicago skyline”. So, there you have it. 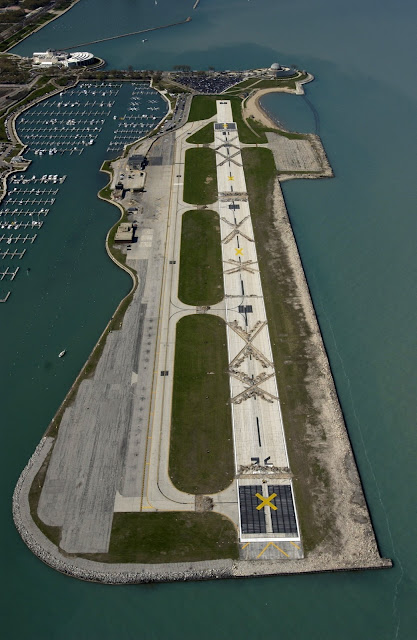 Is Santa Monica Airport next? Some people in that community have already developed plans to turn their local airport into a park also. It seems all of our local airports are under attack by someone or some group looking to use the land for their preferred interest.

Be sure, Aviation as we know it is under attack in many ways and we need to keep our eyes open and be vigilant to make sure the next generation has a place to learn, experience and enjoy what we have dedicated so much of our time, energy, money and love.

A friend of mine wrote this the other day and I wanted to add it here.

Here today, while there are still plenty of airplanes in the sky, I fear that this is a waning phenomenon. The administration has made it a top priority to demonize and vilify people who leave the ground for periods of time that exceed the time it takes to jump. One of the surest signs that a country has its shit together is when it can do things that are so potentially lethal so safely that no one ever seriously considers the downside of the activity when they engage in it. If we give that up, it is truly a sign that decline is only a modest way of describing the mode of the nation.